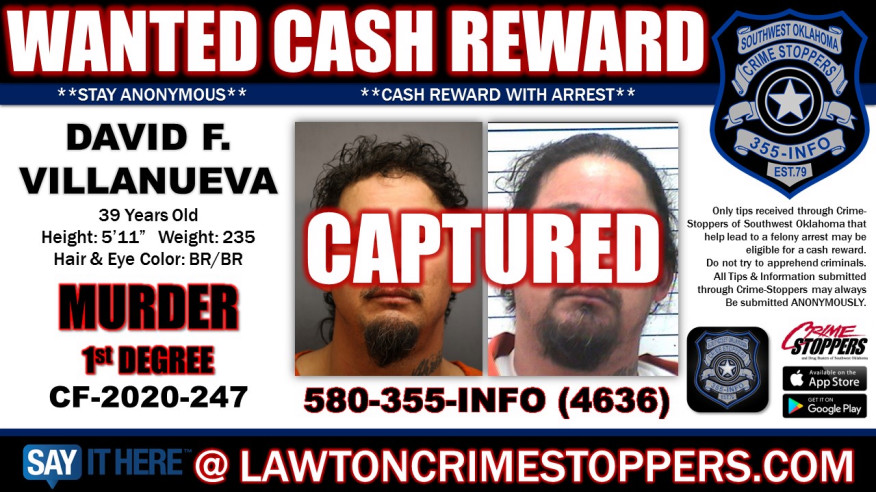 LAWTON, Okla. — The suspect in a homicide in Lawton over Memorial Day weekend has been captured in Duncan, according to officials with the Lawton Police Department.

Authorities confirmed David Villanueva, 39, was taken into custody around 1:30 a.m. Thursday morning in Duncan by Duncan police with the assistance of the U.S. Marshal’s office.

Villanueva is wanted in connection with the stabbing death of 41-year-old Shawn Loud on Saturday, May 23.

Police said they have video evidence of Villanueva fleeing the scene of the stabbing around 3 a.m. on Northwest 20th Street in Lawton.

According to witness testimony, the victim was sitting in a shed in the backyard and Villanueva was blocking the doorway and asking about stolen property.

According to police, Loud tried to get out of the shed when he and Villanueva began a struggle that led to Loud being stabbed multiple times.

Police said Loud then stumbled into a car wash behind the property and collapsed. His body was later found in that car wash.

According to authorities, witnesses said Villanueva tried to destroy the evidence before fleeing the scene in a white pickup.

A records check shows Villanueva has convictions for assault and battery in 2001 and has a court hearing on June 4 for a burglary charge.

Splash Parks in Lawton Closed Due to Weather and Improvements

Truck left on side after wreck in Lawton