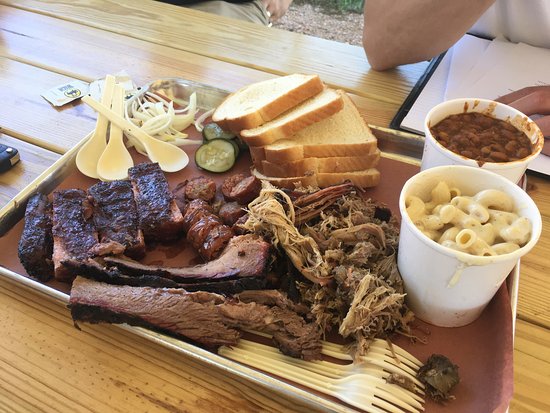 Another Oklahoma BBQ Joint To Check Out

LAWTON, Okla. – We’ve talked a little about a lack of universally agreed upon BBQ here in Lawton for a long time. Woody’s BBQ is still talked about today as being great, I really miss Branding Iron personally, the old-timers talk about a cafeteria style BBQ joint here in town once called Underwood’s… but like most family owned businesses, they go out of business when the next generation chooses a different path for themselves. I get it. Now, I’m not saying there isn’t any good BBQ in town. There absolutely is… but as nobody can agree on just one restaurant being “amazing,” and the bulk of them being franchises serving up reheated food, I’m always up for a road trip to eat truly good independent BBQ.

Truth be told, most BBQ joints are usually known for one or two great meats. For instance, the absolute best chopped brisket in the world can be found at the original and only Head Country BBQ Smokehouse in Ponca City, OK. Van’s Pig Stand in Shawnee has pretty amazing ribs. I still think Rib Crib has the best smoked chicken on the planet. It’s amazingly good. Stables Cafe in Guthrie is rumored to have some pretty epic all-around food from what people in my circle are saying. Great ribs, brisket, pork, and chicken.

Stables Cafe is an interesting place to visit. I’ve been there before, twenty years ago, but can’t remember a dang thing about it. I was in college, drinks were the important thing in the diet in those days. I do remember the building though. Built in the 1890’s just after the land rush established Guthrie as the capital city of this state. Not much about it has changed since then either. You walk in, and it’s full of old-timey stuff that’s enjoyable to look at. If the reviews are correct, the food is pretty enjoyable too. Like most mom & pop restaurants, they offer quite a few menu choices, but everyone seems to recommend the BBQ dishes. Might be worth checking out. If you get there before I do, give me a heads up.

LATS to run on reduced schedule due to COVID-19